DC Dicta has moved. Please visit us at:

Change your bookmarks – DC Dicta is moving at noon today!

DC Dicta will move to its new home today at noon, EDT: www.LawyersUSAOnline.com/DCDicta. You’ll be able to find all the archives there as well as all new posts. This site will no longer be updated.

Also, be sure to check out our new blog focused on news and tidbits from state and federal courts across the nation: Benchmarks, at www.LawyersUSAOnline.com/Benchmarks.

The new site will keep you up to the minute on all the latest legal news from around the country, bring you insightful features, and tips to help you run your law practice better. The new, more user-friendly site will also feature podcasts and allow you to keep on top of the news with RSS feeds and breaking news alerts. The address will stay the same – www.LawyersUSAOnline.com – so be

sure to check it out!

DC Dicta is Moving! Along with the changes, DC Dicta will get a new URL: www.LawyersUSAOnline.com/DCDicta. Starting tomorrow that is where you will find the latest posts as well as all DC Dicta’s archives going all the way back to its 2007 debut. Be sure you change your bookmarks.

Benchmarks Debuts! Tomorrow Lawyers USA will also launch its latest blog: Benchmarks. Lawyers USA‘s legal editor and Benchmarks blogger Pat Murphy will give you the lowdown on recent state and federal court opinions, from the blockbuster rulings to the quirkiest cases. You can find it tomorrow at www.LawyersUSAOnline.com/Benchmarks.

And we Tweet too! Also, Lawyers USA is all atwitter. That’s right, you can follow up on Twitter – and you don’t even have to wait until tomorrow! Do it now: twitter.com/LawyersUSA.

As we know, Supreme Court Justice Antonin Scalia – a fan of 24 character Jack Bauer – sees nothing wrong with roughing up a terrorism suspect if it yields information that can help stem an attack. His colleague and frequent opera companion Justice Ruth Bader Ginsburg, however, has a different view.

“The police think that a suspect they have apprehended knows where and when a bomb is going to go off,” Ginsburg said during a speech at Moritz College of Law at Ohio State University, according to a New York Times report. “Can the police use torture to extract that information? And in an eloquent decision by Aharon Barak, then the chief justice of Israel, the court said: ‘Torture? Never.'”

Ginsburg also said that she wishes that she were not the only woman on the bench. “There I am all alone,” she said, “and it doesn’t look right.”

One thing that she did not talk about, The Washington Post reported, was any desire to step down. Ginsburg, 76, underwent cancer surgery this past winter, and is now undergoing chemotherapy treatments. Still, she hasn’t missed an oral argument – or even a beat, for that matter. At the event, during a videotaped tribute to Ginsburg, Chief Justice John G. Roberts, Jr. offered “my warm congratulations on the occasion of your reaching the midpoint of your tenure.”

You can watch the webcast of the symposium here on Moritz College of Law’s website.

This week begins on the leisurely note for most of the folks at the top of the three government branches. The Supreme Court and Congress are in recess until April 20. And today the White House hosts the event has become the hottest ticket in town: the Easter Egg Roll. Perhaps Bo, the First Pup, will make an appearance.

And as you search for recipes to help you use those leftover boiled eggs and latkes this week, take a look at some legal news:

Pirate prosecution: The Justice Department is mulling whether Washington or New York will be the site of the criminal trial of to the Somali pirate captured in the dramatic rescue of an American merchant vessel captain that left three other pirates dead. It would be the nation’s first piracy case in recent memory. (AP)

Teflon AG: Last week was not a good one for the Justice Department – yet unlike his recent predecessors Attorney General Eric Holder isn’t being skewered over the misfortunes – he’s even garnering praise. (Legal Times)

FDA safety check: Federal regulators will ask makers of some of the riskiest medical devices to prove that their products were safe and effective – a step that critics have said was long overdue. (NYT)

Things are quiet on the Hill as both the U.S. Supreme Court and Congress sit in recess. Across town, President Barack Obama is spending today holed up with his economic team to try to find ways to pull the country out of its recession.

Clash of the right-ans: Religious groups fighting gay rights matters in courts are increasingly coming up on the losing end in the legal “clash between the right to be free from discrimination and the right to freedom of religion.” (WaPo)

Justice Department gets judged: The Judge who presided over the hearing dismissing the conviction of former Sen. Ted Stevens gave government prosecutors who handled the case a good tongue lashing. And it wasn’t the first time the Justice Department has felt his wrath. (WaPo)

Fools as clients? The recession has boosted the number of people representing themselves on court, raising questions about the fairness of the outcomes. (NYT)

Being e-conomical: With the recession taking its toll on the bottom lines of many businesses, attorneys who engage in electronic discovery are looking to cut costs for clients. (Lawyers USA)

Things aren’t going great, and they’re not getting better: The safety of the nation’s food supply has not improved over the past three years, and an overhaul of the food regulation system is needed, according to the Centers for Disease Control and Prevention. (NYT)

Holder to prosecutors: ‘Your job is to do justice’

Holder, speaking as investigators are probing allegations of prosecutorial misconduct in the handling of the criminal corruption case of former Sen. Ted Stevens, reiterated to the new prosecutors that their goal should be obtaining justice, not just a conviction.

“Your job as assistant U.S. attorneys is not to convict people,” Holder said, according to the AP. “Your job is not to win cases. Your job is to do justice. Your job is in every case, every decision that you make, to do the right thing. Anybody who asks you to do something other than that is to be ignored. Any policy that is at tension with that is to be questioned and brought to my attention. And I mean that.”

Holder, whose appearance at the event was not announced, addressed the Stevens case specifically. “There were mistakes made in the Stevens case,” he said. “We’ll see exactly what those mistakes were all about. …There are going to be a lot of articles, I suspect you’re going in newspapers over the next couple of days, about how things have gone wrong in the department. A lot of these articles are going to be unfair. And yet we have to deal with those perceptions. We’re capable of dealing with them, but the only way ultimately that we’re going to restore faith in this department is through the work that you all do.”

Restoring that faith means that prosecutors cannot sacrifice justice in pursuit of a guilty verdict, Holder said. “You are expected to do nothing more than the right thing. Anything other than that is unacceptable,” he said.

This week Jon Haber, CEO of the American Association for Justice, the country’s largest trial lawyers group, announced he is stepping down.

Haber, who has held the position for four years, said that the time was right for a change at the top, given the current “pro-civil justice President and Congress.”

“Because we are in such a strong position, I have decided this is the best time for me to step down to take on new challenges,” Haber said in a statement.  “The new pro-civil justice environment has put the organization in the strongest position it has been in a generation.  This time period also presents opportunities for those seeking the next challenge in their careers when it comes to fighting for justice and progressive values.  I am considering several very promising opportunities.”

Attorney bloggers on InjuryBoard.com had praise for Haber’s work. “He brought the AAJ into the current century by updating its use of technology and making it appreciate what needed to be done to better advocate the ‘People Over Profits’ philosophy of the organization,” wrote attorney Mike Schneider.

Mike Bryant added: “Jon was the leader in bringing the organization into the advanced technical world. As an organization of and for plaintiff lawyers it is a hard fought battle with insurance, pharmaceutical, and big business interests.”

No word yet on who Haber’s replacement will be. 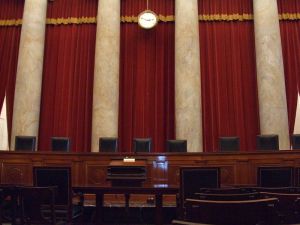 Don’t let this week’s 5-4 Supreme Court decision in Corley v. U.S. – where the justices split along ideological lines with Justice Anthony Kennedy again serving as swing voter – fool you. This term, the justices are opting more often to agree to agree.

So far this term, nearly half of the Court’s opinions have either been unanimous or nearly so, reports AP’s Mark Sherman.

Corley is the eighth decision this term in which the Court split 5-4. In six of those splits, Kennedy was the swing voter, joining the Court’s so-called conservative bloc four times, and the liberals twice. Two 5-4 opinions had no clear ideological connection.

Since the Court developed a reputation as having a strong ideological divide in its October 2006 term, Chief Justice John G. Roberts, Jr. has often expressed a desire to see more consensus among the justices. In 2007, Roberts said: “The court functions most effectively as a judicial institution saying what the law is when it can deliver one clear and focused opinion of the court.”

It is unclear whether Roberts’ stewardship is behind the justices seeing more eye to eye. 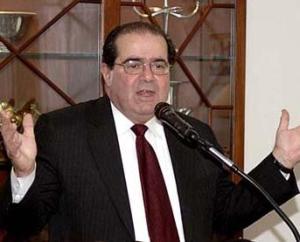 Supreme Court Justice Antonin Scalia loves talking about the Constitution. He’s not afraid to discuss hot-button topics like the death penalty and gay marriage. But apparently, he’s not a big fan of getting his picture taken.

Yesterday, during a speech at William Carey University in Mississippi, Scalia was busy talking about constitutional originalism while a media photographer, who was authorized to take still shots of the justice, was snapping away. Still, Scalia was displeased.

“Could we stop the photos please?” Scalia said, according to a report by The Hattiesburg American.

Interestingly, the last time Scalia spoke in Hattiesburg was in 2004, when a free speech battle was spurred after a federal marshal seized the tape recorders of reporters from the American and the Associated Press covering Scalia’s talk. The news organizations sued the U.S. Marshals Service and won, and Scalia later apologized to the reporters and they got their tape recorders back.

Yesterday during Scalia’s talk, he touched on the issue of gay marriage just over a week after Rep. Barney Frank made headlines for calling the justice a “homophobe.” Although Scalia declined to comment on Frank’s comments at the time, yesterday Scalia said that the Fourteenth Amendment does not provide a right for gays to marry any more than it provided a right for women to vote. It is for legislators to carve out any such right, Scalia said – just as they did by passing the 19th amendment guaranteeing women’s suffrage.

He acknowledged that not all Supreme Court justices share his views.

“There are four justices who have sat beside me who believe that the death penalty is now unconstitutional … and they believe it to be unconstitutional, because they think it ought to be,” he said. No word yet on whether the ears of Justices Ginsburg, Stevens, Souter or Breyer began to burn.